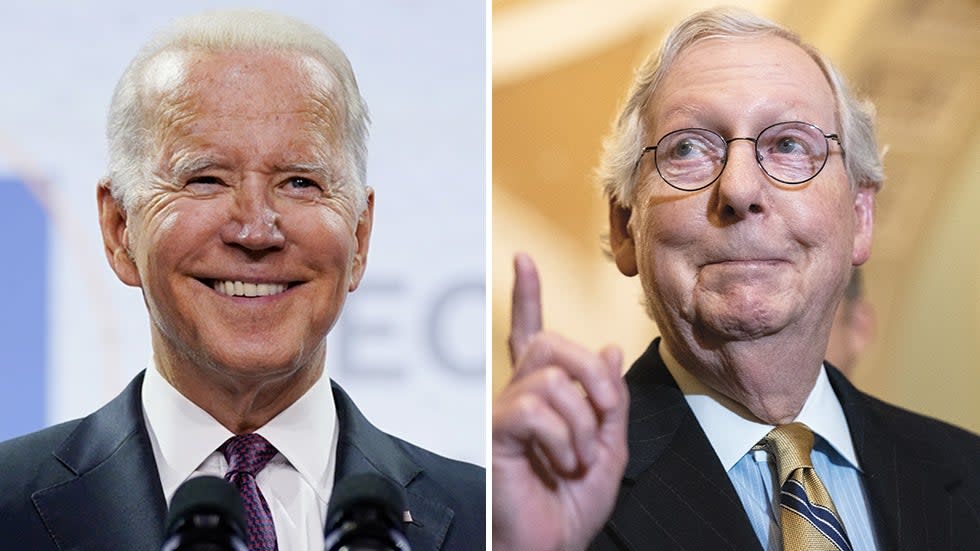 Thanksgiving marks a brief cease-fire from partisan warfare in Washington.

But the usual hostilities will resume soon enough. The midterm elections are less than a year away.

Here are five political reasons President Biden can be thankful today – and five reasons for his GOP opponents to feel some gratitude, too.

Biden can be grateful for…

The nation’s battle against COVID-19 has not been won yet, but it has been transformed by the widespread availability of vaccines.

According to the latest figures from the Centers for Disease Control and Prevention (CDC), roughly 196 million Americans are now fully vaccinated and an additional 35 million have received at least one vaccine dose.

The extension of vaccine eligibility to young children has given some much-needed peace of mind to them and their parents. Meanwhile, nearly 40 million adults have received a booster dose.

COVID-19 is the issue on which Biden polls most strongly, for good reason.

His standing would be vastly different if the vaccines had not come on-stream when they did.

It’s been a long and winding road, but Biden’s biggest legislative goals are within reach.

A major infrastructure bill has been signed into law, and the president’s even larger social spending measure has finally made it through the House.

In both cases, Biden owes a debt of thanks to Speaker Nancy Pelosi (D-Calif.), who is now almost three years into her second stint wielding the gavel.

Even Pelosi’s ideological opponents acknowledge her skills as an exemplary strategist and vote-counter. The first female Speaker ever, she has led House Democrats through almost two decades of enormous tumult.

Biden, relying on tiny congressional majorities, is lucky to have someone of such proven mettle by his side.

The economy is still beset by problems, primarily inflation. But there are bright spots for the president, too – and one is job growth.

In June and July, the economy added approximately 1 million jobs per month. Growth slowed as summer turned to fall. But the latest figures showed employment growing again at a healthy clip, with the nation adding 531,000 jobs in October.

Biden didn’t get as much credit as he might have at some points during the year, partly due to flawed data.

Jobs reports for August and September – panned at the time as mediocre – now appear to have significantly undercounted new employment.

New jobs in August, initially projected at a shockingly low 235,000, have been revised to 483,000 based on additional data. According to The Washington Post, it was “the biggest positive revision in almost four decades.

Former President Trump is broadly disliked by the population at large, even as he remains hugely popular with GOP voters.

That makes the former president’s refusal to sidle off into retirement a net positive for Biden.

Trump causes chaos within Republican ranks with his volleys of personal invective, which have recently been aimed at Senate Minority Leader Mitch McConnell (R-Ky.) among others.

The former president’s willingness to involve himself in primaries also worries some in the GOP who fear he is elevating candidates who will end up losing winnable general election battles.

And the party finds it hard to move past the question of whether Trump will seek to regain the White House in 2024.

A recent Economist-YouGov poll released Wednesday found 54 percent of Americans have an unfavorable view of Trump, compared to just 41 percent who view him favorably.

With numbers like those, Biden won’t mind if the Trump circus keeps rolling.

Biden’s own approval ratings have taken a battering in recent months.

He has suffered politically from inflation, the botched withdrawal from Afghanistan, concerns over immigration, the tortuous grind to pass legislation and the delta-driven prolongation of the pandemic.

But Biden still has almost a year before his party faces voters nationwide.

That is enough time to perhaps turn the corner on some of those issues, like inflation. Other problems, like Afghanistan, may fade further into the rearview mirror.

Republicans can be grateful for…

Biden’s key pieces of legislation have passed the House, but they took a long, long time – and it was a messy process.

Even after all that, the social spending bill still faces an uncertain fate in the Senate.

Along the way, the Democratic divisions that had been simmering beneath the surface during Biden’s early months in office exploded.

It’s not just a matter of policy differences between the most centrist Democrats, like Sens. Joe Manchin (W.Va.) and Kyrsten Sinema (Ariz.), and their progressive counterparts like Congressional Progressive Caucus Chairwoman Pramila Jayapal (Wash.) and Rep. Alexandria Ocasio-Cortez (N.Y.).

There is also clear, personal distrust.

The tensions slowed legislative progress to a crawl. And they aren’t going away anytime soon.

Part of the upside for Republicans was the result, pure and simple.

Youngkin, a political novice, beat McAuliffe, a former governor and longtime ally of the Clintons, in a state that Biden had carried by 10 points over Trump a year before.

But many Republicans were also enthused by the way in which Youngkin campaigned. In the general election, he kept his distance from Trump even as he was careful to avoid alienating the former president’s supporters.

His approach meant that Democratic attacks on him as a Trump proxy fell flat. Yet he was still able to energize GOP and moderate voters around issues from education to inflation.

Youngkin provides the template for how Republicans can run in Democratic-leaning states and districts even as Trump still casts a long shadow.

The fairness or otherwise of the nation’s redistricting process, where the boundaries of House districts are commonly drawn by state legislatures, has vexed academics and “good government” advocates for years.

The reality is that Republicans right now have the advantage and are using it.

According to a New York Times analysis published Nov. 15, Republicans hold the levers of power in states that encompass 187 congressional seats, while Democrats are in control of just 75 districts in the same way.

So far, that has translated to redrawn maps that provide for five new seats that are expected to be Republican and the elimination of one seat that would have likely been in the Democratic column.

The importance of the net change is clear, given that the House is so finely balanced in the Democrats’ favor right now, 221-213.

Democrats face a tough time in next year’s elections anyway, given that a new president’s party almost always loses seats in the midterms.

Redistricting makes the tailwind behind the GOP even stronger.

Vice President Harris has not had a good first 10 months in the job.

The problem has many facets, some of which are not her fault.

Her portfolio of issues includes two especially knotty topics, immigration and voting rights. Some criticism of her may well be fueled by sexist and racist double-standards.

But it’s also true that Harris has made some unforced errors – the most notable being a weirdly defensive interview with Lester Holt of NBC News during her first overseas trip in June.

Reports of staff turmoil have also proliferated – a constant theme throughout Harris’s political career, and an irritation for the low-drama Biden White House.

Harris’s underperformance has in turn fueled speculation about 2024.

If Biden, who turned 79 on Nov. 20, does not run for a second term, his 57-year-old vice president would be the obvious heir apparent – if only she were doing better. Her perceived weakness has fed speculation about the future ambitions of figures such as Transportation Secretary Pete Buttigieg and Sen. Cory Booker (D-N.J.).

Republicans are of course out to get Harris. But she has also made herself too easy a target.

The GOP and its media allies have often proven adept at finding cultural issues that tug at voters with a visceral force.

The pattern appears to be repeating itself.

Youngkin’s win in Virginia was powered in part by anxiety about “critical race theory” – strictly speaking, an academic idea that is rarely taught at the high school level, but something that has become a catchall term for broader concerns about left-leaning curricula.

On the same night as Youngkin’s victory, a progressive-backed police reform effort in Minneapolis also failed. The measure, which would have replaced the police department with a department of public safety, was handily defeated in the city that witnessed George Floyd’s murder last year.

Polls also show sweeping concerns that the nation is becoming too politically correct and that people feel fearful about expressing heterodox opinions.

It’s easy to see how many of those debates, around everything from “defund the police” to hypersensitivity about language, might play out to the GOP’s advantage.